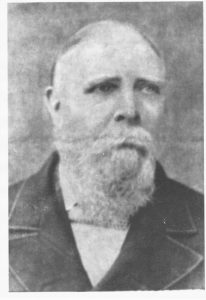 “Alfred Banks (1828 – c. 1902) was the father of Elizabeth Kate Banks. He was a commercial traveller and was killed by a train while cutting through the railway yards on his way home from work at the age of 72. Grandma Banks visited the Butterworths on Tottenham Court Road. Mother (Kate E. Butterworth) remembered her as a little old lady who wore a lace cap and carried a reticule (drawstring bag) in which she carried sweets (candies) which she treated them to. She was about 50 years of age. At the time my grandmother (Elizabeth Kate Butterworth, nee Banks) was widowed, her mother Grandma Banks (Catherine Dixon Draper) had died. Granny went to live with her father Grandpa Banks, taking with her Mabel, her youngest girl, about two years of age, while she took a course in nursing. At the death of Grandpa Banks the second wife had cleared everything out of the house but my Grand­mother did get the family Bible. Unfortunately at the death of my Grandmother, although Mother (Kate Elizabeth White, nee Butterworth) sent money to have the Bible sent to her, nothing was ever heard of what happened to it. Grandfather (her second husband) George Selfe’s family probably got everything.”

The Ancestry.com website states that Alfred Banks was born in 1828 in Birmingham, Warwickshire. He and Catherine Dixon Draper were married November 10, 1850. Their first child, Elizabeth Kate Banks, was born August 21, 1851. For more information about the Banks children other than Elizabeth Kate, see this very detailed website by Ian and Colin Cairns (on the website, see Banks under the letter “B”).
http://wc.rootsweb.com/~icairns 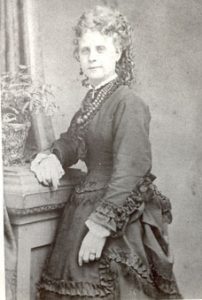